Suanluang Flowers Festival at Suanluang Rama 9 Public Park, 1st – 10th December 2012, Jesada Technik Museum was honored by Suanluang Rama 9 Foundation and True Corporation, the organizer of the “With Love and Loyalty” concert, to exhibit the “Micro Cars in Botanical Garden” in front of Ratchamangala Pavilion, a landmark of the park. 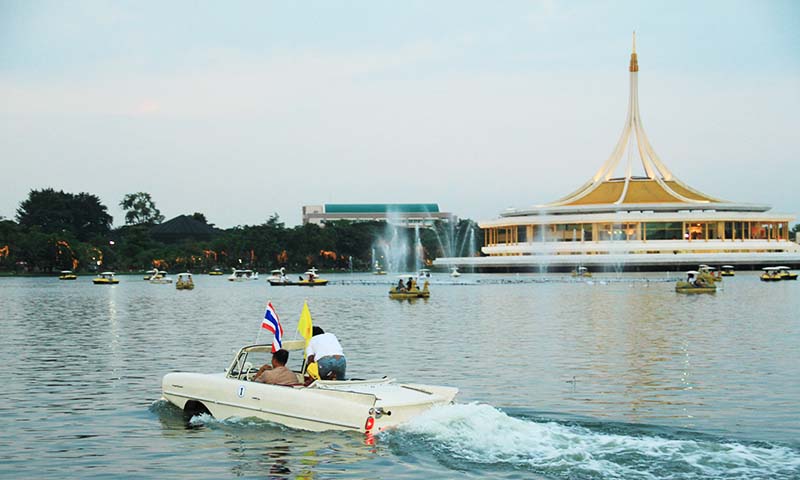 The hi-light of the event was the Amphicar Demonstration in Tra Pang Kaew, the lake beside Ratchamangala Pavilion, during 8th – 10th December. Red and white amphicar show brought a great surprise to the audience when the cars ran regularly on the road and suddenly moved into the lake and they became boats gliding the water.

This was a peculiar scene that most of the people have never witnessed and some have only seen in movies. It could be considered the first amphicar show in Thailand. While the amphicars were in the lake some of the audience, especially the kids, experienced the ride with joy and excitement.

On 10th of December, Kindergarten School buses from Japan and Checker Aerobus Limousine from USA served the Botanical Garden Tour to people visiting Suanluang Rama 9 with love and loyalty to His Majesty the King.

Your ticket for the: Amphicar Show at Suanluang Rama 9