At some below zero centigrade, from Baltic Sea, in January 2007, a group of defiant people made a great challenge towing a cold-war submarine during the cold winter time. The destination is Thailand. 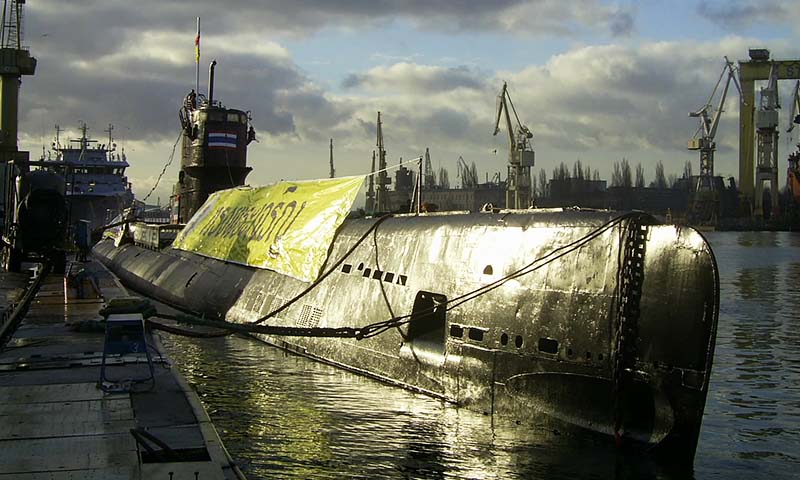 U-194 is the name of the Whisky Class Submarine. She got her name changed by Timo Wallin, a Finnish man who bought her from Russian Navy after the Soviet Union collapsed in 1991. The submarine was in Projektu 613 made to Joseph Stalin’s order and had been patrolling in Baltic Sea during the cold-war era.

Mr. Wallin removed the torpedoes and adapted her to be a submarine museum. U-194 had been exhibited along the coast of Finland and Sweden for 15 years before she was ready for a new owner and new visitors in another part of the word.

Mr. Jesada Dejsakulrit, the president of Jesada Techink Museum bought U-194 and got her repaired at a shipyard in Szczecin, Poland. He then hired a tugboat team from Sweden to tow the submarine to Thailand. Four men from the museum accompanied in the tugboat for coordination and recording the journey. Few days before the trip, Mr.Jesada found in Szczecin that the tugboat was the whaler at the age of 80 years…two times older than the submarine.

The trip started on 22nd January 2007 and had been struggling through the end. It began with connecting cable was cut by tugboat propeller that made the submarine disappeared in a dark night at Oresund Channel (Copenhagen, Denmark – Malmo, Sweden) before reconnected again with the help from local fishermen. Few days later, hydraulic steering system was broken leading the oil went up soaking on the floor of the bridge room. And finally heavy storm that sometimes created 5 -7 meters high wave while the two old ladies floating in the North Sea for which somehow allowed sea water into the submarine and she started sinking.

“Cut the wire”, the word from captain who ordered his crew in the morning of 5th February 2007. “To save 11 lives in the tugboat” was the reason for the action.

The submarine rests forever in the bottom of the North Sea, south west of Denmark, Jutland peninsula.

U-194 became Jesada Technik Museum’s collection outside the Kingdom of Thailand after since.

Your ticket for the: Remember U-194